Posted on November 27, 2013 by Meditating Muslimah

This past weekend, our local Turkish Center held their annual Noah’s Pudding Festival. The festival commemorates the Islamic holy day of Ashura, which was on November 14 this year.
For many Muslims, the day of Ashura is commemorated as a day on which many important events have happened in the history of Islam. It is a holiday that is also shared with Jews, due to the common tie to the prophet Moses. Muslims who celebrate this holiday do so due at the encouragement of the Prophet Muhammad (pbuh). According to hadith (sayings and traditions of the prophet that were passed down), while the Prophet was in Madina, he noticed that the Jews were fasting on the 10th of Muharram (Islamic calendar). When he asked why, he was told it was because that was the day that God saved the Israelites from the Pharoah, by opening the Red Sea for them. To thank God, the Prophet Moses fasted on that day. The Prophet therefore encouraged Muslims to fast as well on that day, since Muslims also believe in the Prophethood of Moses.

It is also believed that it was on this day in history that Noah’s Ark landed following the flood. Coincidentally, many traditions hold that it was on Mount Ararat in modern day Turkey that the Ark landed. Many Turks, as well as various other cultures, celebrate this day not only by fasting, but also with a special pudding called Ashure: Noah’s Pudding. It is said that after the Ark landed, Noah wanted to celebrate the event in some way, but they did not have much food left. So they put all the ingredients they had left into a pot and made a pudding. The pudding has become a holiday tradition in Turkey. The dessert generally has

15 ingredients in it. Ideally, you should use ingredients that you already have in your home, following in the tradition of Noah. But there are basic ingredients that make up this pudding, like bulgur, chickpeas, and dried fruits. Although it doesn’t sound very appetizing, trust me, it is!

At the festival this Saturday, they held a Cooking contest to see who could make the best Ashure, and I was asked to participate. I was a bit hesitant at first, since it was my first time making this pudding, but I decided 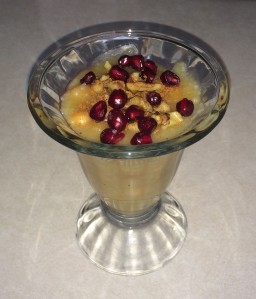 to go ahead as it would be a fun experience. I made my pudding on Friday night, and was very pleased with the results. Apparently, I was so pleased with my pudding that I even dreamed that night that I won third place in the contest!

Okay, so as for the results — I did win third place! Funny thing is though, there were actually only four of us who entered. But the fact that my dream came true gave me a pretty good laugh for the rest of the weekend 🙂

For those who are interested, here’s the recipe I used for my Ashure; there are a lot of variations on how to make it, even in the Turkish culture. Mine turned out a little too thick, especially since it thickened more while it sat in the refrigerator overnight. You can add more water if it looks too thick.

Note: This makes a lot of servings! This is double the original recipe.

1 cup chickpeas (canned or if raw, boil them first so that are soft)

1 cup white beans (I didn’t use these, but I will next time! Again, cook them first)

10 dried figs – cubed (I didn’t have any of these either, but will have to find some for next time)

Nutmeg (traditional Ashure doesn’t use this, but I thought it went nicely with the cinnamon)

Boil the bulgur (wheat) with 4 cups of water until most of the water is absorbed. I then turned off the stove and let it sit and cool while it continued absorbing water. Wrap the cooked bulgur in a cloth and let it sit overnight. Soak dried apricots, raisins, and dried figs in water overnight as well (note: the directions I read said to put them each in separate bowls. I was lazy and put them all in the same bowl, and didn’t see any issue with that.)

The next day, put the wheat in a pot with 6 cups of water and boil (ummm . .  quick note — I just realized that this is where I messed up. I doubled the original recipe, but forgot to double the water, so I only added 3 cups of water here!). Add rice and boil until cooked and soft. Then crush with the blender a little bit and return to pan (or you can use one of those cool handheld blenders and you won’t have to remove it from the pan — wish I had one to use here!). Add drained chickpeas, then add the dried fruits as well as the water they were sitting in. You can also add the lemon zest and peaches at this point. In a different small pot, boil cloves with 1 cup water. Add that water to the pot with wheat  (strain out the cloves). Okay, so it was here that I realized I didn’t have enough water. So I actually ended up boiling another 2-3 cups of water with cloves and adding that to the pot. But if you’ve added the correct amount of water initially, you shouldn’t have to do that! Next, boil on low heat for about an hour, stirring occasionally. Be careful, as it might stick to the bottom of the pan if the heat is up too high. Then add sugar, and boil for another half an hour. You can adjust the amount of sugar depending on how sweet you want it. Best served warm and topped with nuts, pomegranate, and cinnamon.

I combined several recipes that I found online, borrowing ingredients that I liked from different ones. Some versions call for rose water. The primary recipe I used as a guide was the one on this Turkish Cooking Class blog.

Sharing my experiences as a new Muslimah, thoughts on religion, things that inspire me, foods I love to make and eat, Islamic fashion, travel, and life in general!
View all posts by Meditating Muslimah →
This entry was posted in Islam and tagged Ashura, Ashure, Asure, islamic holidays, Muslim holy days, Noah's Pudding, Prophet Noah. Bookmark the permalink.

Let me know what you think! (In English please) Cancel reply